i don’t know which city is supposed to be more dangerous, but as we stepped off of the bus in rio de janeiro at night, it was a bit sketchier feeling than sao paulo. of course, all bus stations and airports are always on the outskirts of town, so you always arrive to a new city in an area totally unrepresentative of the actual city. what if chicago was just what surrounded o’hare?

we paid fifty cents to use the bus station bathroom then tried to follow uber’s instructions to the pickup location. our uber driver was so sweet. he tried to message me in portuguese to move to an easier pickup location. i responded that i didn’t speak portuguese, and he told me to sit tight. we waited for ten minutes anxiously staring at the moving car on my phone’s uber app. and then, we connected.

it was late. the bus was late. we sat in standstill traffic for two hours entering rio on the bus. i had hoped to get to the hostel before dark, but oh well.

we drove in the dark, intensely aware of every time the uber driver pressed the lock button repeatedly in certain areas. he pointed out landmarks in the dark, and we haphazardly tried to communicate in spanish/english/portuguese. he could not believe that we were only in rio for one day.

our hostel, pura vida, was at the foot of a favela, a brazilian shanty town. our uber driver was very unsure of the location. we entered from a side street and got a full night tour of the favela action. he warned us to be careful.

we found the hostel entrance and hiked up several flights of stairs. a cute space transformed into your typical backpacker mecca. an outdoor bar, several flyers for upcoming parties, and a girl vomiting at 4am in the room above us. it was simple but perfect for our one night.

after dropping off our bags, we set out for dinner. it was 9pm, and we were starving. we wandered a block away from our hostel and instantly the neighborhood went from favela to copacabana. we found our way into one of the best things about brazil… all you can eat buffets where you pay by the kilo. i usually lose when it comes to buffets because my belly can never actually tolerate more than one plate. but, by the kilo? yes please. maybe this is where whole foods got the idea from…

after dinner, we walked another block down to the main beach drag of copacabana. it was 11pm on a monday, but the sidewalks were full. full of tourists, bars, vendors, crafts, sandcastles, strangers, and that rio energy that you hear so much about. the night was just beginning. people were still hanging out on the beach, which was completely lit with irritatingly bright flood lights. 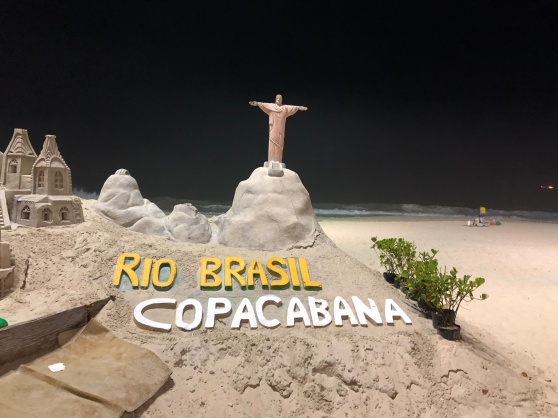 with “at the copa, copacabana” playing on repeat in my head, i embraced the moment and ordered a classic brazilian caipirinha, so full of sugar, you could not even taste the strong alcohol. after only a few sips, i could see how they could be dangerous. (must have been what happened to the poor drunk girl above our room.) 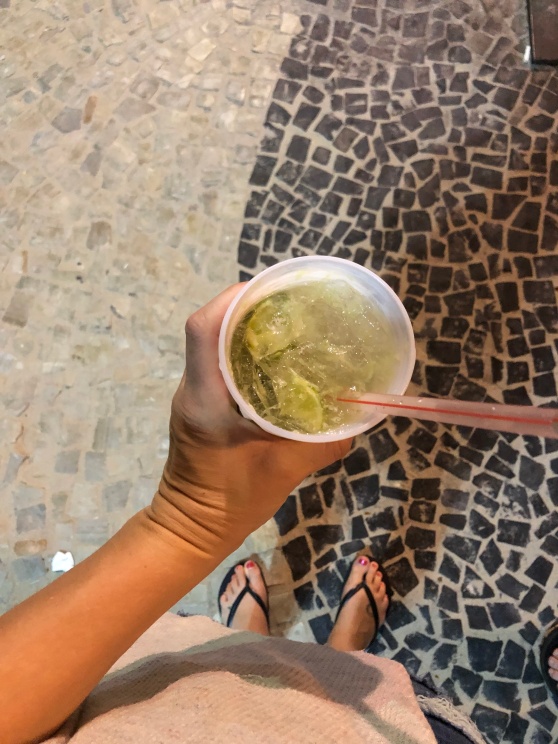 with only one day to take in the city, we headed back to our hostel to get some sleep…

there is always something magical about arriving to a new place in the dark. when you wake up the next day, it is like being in a time machine. you’ve been transported to this new place and have no idea how you got there. nothing looks familiar.

copacabana is just as busy during the day. the iconic sidewalks holding the footprints of millions of visitors. “her name was lola. she was a dancer.”

we strolled along the beach and over to ipanema, a close by beach with cleaner water and a more chill vibe (plus an epic mountain backdrop). we found a small corner cafe and indulged in some croissants and cafes con leche. ipanema is adorable. full of shops and trendy restaurants. a great way to start the day. 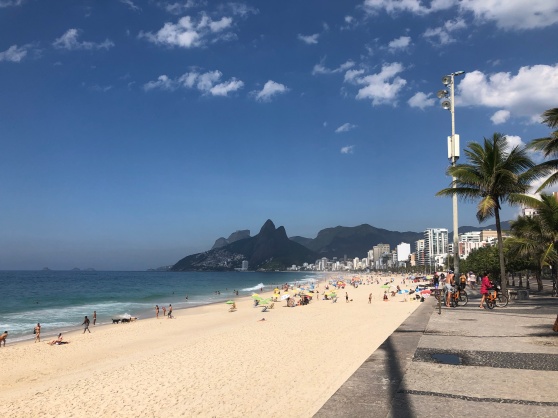 after breakfast, we walked around the lake until the sun was burning my skin. a beautiful little lake in the middle of the city, just a few blocks from the beach. it was slightly odd (since the ocean was so close) and didn’t look very used, but it was well maintained with a great walking path surrounding it as well as several little restaurants. 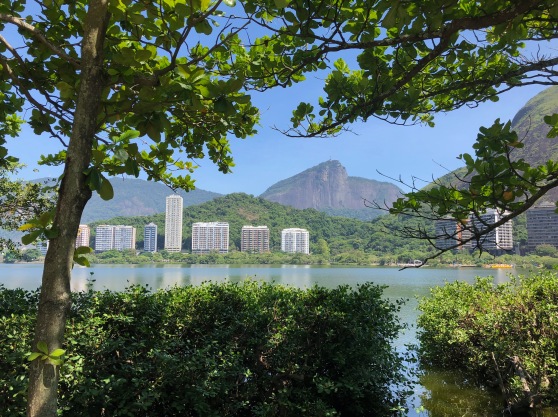 and then, onto the main attraction…

we popped into an uber and headed up to christ the redeemer. sure, it’s touristy, but the view is worth it. and, the statue is a phenomenal feat. wow. rio is absolutely stunning.

mountains, rivers, lakes, ocean, skyscrapers, all intertwined. it is a city with history and character and beauty. it is real, authentic, full of life.

if you’re ever in rio, take the train up to the top. snap your selfie with jesus and soak in the view.

with the hours dwindling, we ubered across town to lapa, the party district, just to walk around (and see the arches of course). we hiked all the way up the famous stairs to santa teresa, a cute artsy neighborhood up in the hills.

it was beautiful from up there. quiet and quaint. cafes and shops hiding in every doorway.

you can take a san francisco-esque trolley up and down, but since we were running short on time, we hopped in another uber and headed back to copacabana for some dinner before our series of flights to argentina.

a grilled spread of meats, french fries, and a couple of beers overlooking the beach. sometimes it’s simply sitting that gives you the best perspective of your travels. people watching and enjoying your surroundings.

we’ll be back to rio someday. there is so much rock climbing right in the city. so much left to see.

but, for now, our 24 hours in rio had come to an end. we grabbed our suitcase from the hostel and sat in two hours of traffic to get to the airport. and then, a ridiculous lineup of flights to get to our next destination: rio de janeiro > sao paulo > santiago > buenos aires > bariloche and then a bus to el bolson.

the things we do to save a little money…

now, onto a friend’s wedding in one of my favorite places on earth.