from tsim sha tsui to central, from lamma island to shek o, from macau to kowloon, i soaked in as much of hong kong as i could before departing china for my impromptu reroute.

tsim sha tsui is made up of rows and rows of “mansions” filled with tailors, money exchanges, massage parlors, and other random shops. most cheap lodging is found in guest houses that really are just apartments morphed into hotels. small and sketchy. cleanliness is optional but slow elevators are required.

the streets are bustling in this tourist district. you can slip into sync with the masses and march down one of the main drags to the jade market. although kitschy and overpriced, it is an excellent space to browse and take in old chinese men eating noodles over their suitcases of jade and antique wares. the surrounding area offers other food and knickknack markets to further fuel a truly intriguing people watching stroll.

first and foremost, tsim sha tsui visits need to include crowding down on the water’s edge to take selfies in front of hong kong’s central skyline situated across the bay.

then, come back around 8pm to take in a spectacular of lights. electricity dancing over the metal giants and shooting across the foggy night sky.

across the water, central hong kong stands tall packed with bank buildings and business suits. double decker street cars move 9-5ers from point a to point b and back.

an endless vertical incline of escalators takes pedestrians up through the mid-levels, full of trendy bars, health food stores, organic restaurants, and spas.

at the top, signs direct you back down through a sad excuse for a zoo.

but the real treat in central is victoria peak, or the peak as it’s called. don’t buy a roundtrip ticket for the tram that takes you to the top. take the tram up and the bus down. after spending hours looking down upon hong kong’s jungle of skyscrapers in amazement, you won’t want to wait in the massive line to take the tram back down. the view from the top is epic. 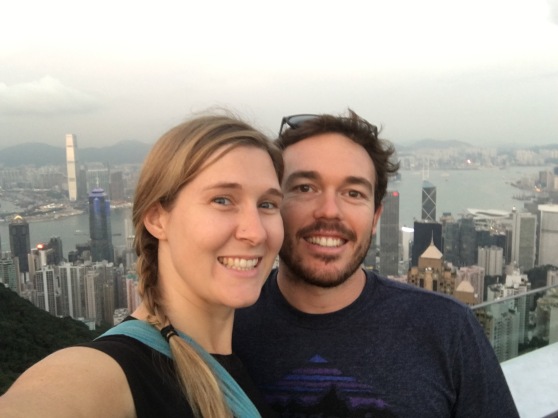 go right before sunset and watch the city shift from blue skies to fireflies. it’s like your own time-lapse…in real time.

head to happy valley at some point and bet on the ponies. every wednesday night it’s themed. we went on james bond night. figuring out how to bet in chinese took me at least an hour, but in the end i won $18 and got to watch a couple ridiculously ripped men flagpole off each other. all in all, a win. plus ryan made friends with a swiss banker, plastic surgeon, and yacht salesman. rubbing elbows with the upper class at the races (and getting ready for the boob job i might need one day). 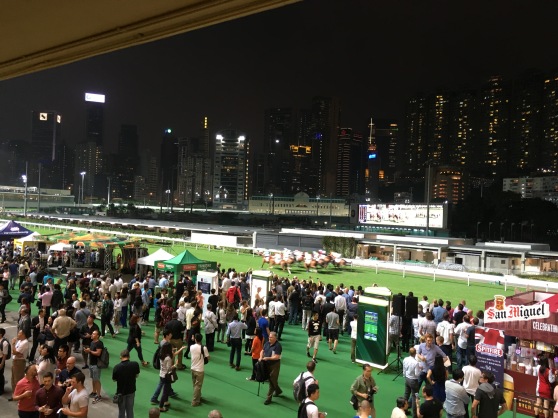 after a few days of city life, we were ready to escape. a quick ferry ride to the outlying island of lamma island offered a pleasant change of scenery. within minimal, if any, roads, this little island is green and lush. one end of the island has a small town housing hippie boutiques and quaint apartment complexes.

“the family trail” takes you for a 4k walk to the other side of the island, a strip of seafood restaurants on stilts above the water.

tanks and tanks sit on the sidewalks filled with sea critters of which i have never heard.

after a leisurely walk (and a few days in hong kong), a delicious seafood meal overlooking the sunset was a much needed recovery. 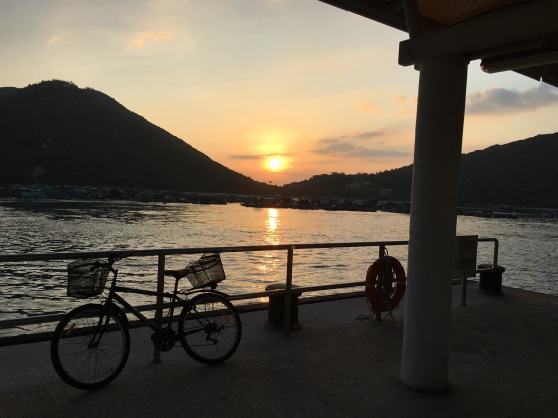 you always see more interesting things when you know a local, and when our friend patrick arrived, we discovered shek o. his friend lived there and was living the good life. steps from the beach. steps from town. this cute little area sits away from central and feels like an entirely different world. the beach atmosphere. we drank through an entire cocktail list at their local beach shack pub and then headed to the next, on the backside of the town.

it was nice to be away from the tourist scene. a night with home cooked food, too much spirit (in all senses of the word), and wonderful company. i spent the evening attempting to drunkenly learn turkish, and boy did i feel it the next day. but, not as bad as ryan. as we piled into a taxi in the morning, poor ryan sat shaking armed and ready with a plastic bag to puke in. windy roads did him in, but not a drop made it into the taxi. what a champion.

however, our itinerary for the day involved taking an hour ferry ride over to macau, the vegas of china. we returned to our hostel room for a brief regrouping, only to find that someone else was in our room, and all of our luggage was missing. the receptionist informed us that they had switched our room. that our stuff was “downstairs.” all i could do was laugh.

turns out our stuff was not downstairs but just moved to the room across the hall. we regrouped and rallied. by lunchtime, we were riding the luxury boat (free upgrade) to macau with hopes to win big. we studied the possible casinos and decided to start at the venetian.

after pat lost a quick few bucks on the roulette wheel, we filled our bellies with dim sum and headed back to plant ourselves at the cheaper roulette wheel.

turns out ryan hasn’t gambled much and had quite a bit of beginner’s luck. as he quietly hoarded his chips in the corner, looking surprisingly well after his morning of looking like death, patrick and i rode the waves of wins and losses. zero never did hit, but twenty-two did!

it was our last full day in hong kong. as we headed home, i was tired. i was ready to head to paris. since china would not let me in, i would go to the city of love. alone. i would not let terrorist attacks stop me. fear should never dictate.

the next morning, ryan boarded a train and started an epic journey into rural china, ready to rock climb. pat and i wandered around kowloon after checking my bags in at the station. (yes, apparently you can check your bags before the airport so you don’t have to take them on the train. how great!) we found our way up to sky100, a 360 degree viewing lounge 400m above hong kong. another place to stare out over this monster of a city.

hong kong you are a beast.

“don’t you love cities at night?” a friend said to me, visually overcome, as we drove into salt lake city a few years ago. growing up near chicago, i was used to seeing rows upon rows of skyscraper windows glowing like stars in the sky, but it wasn’t until that moment that i really understood just how beautiful these collection of human creations could be.

now take that experience and multiply it by a thousand.

as i flew into hong kong last week, my comprehension of “city” was shattered. in the dust of its dissipation, i pressed my face against the taxi window and strained my neck as i gazed up in pure amazement. column after column flickering in a sea of structure. surrounded and intertwined with the green giants standing tall in the distance.

what was this place?

i was only supposed to be here for a few days. arrive sunday night, leave thursday morning. just enough time to secure a visa to mainland china. a brief stopover on the way to yangshuo, a popular china climbing destination. it was not meant to be a city trip. it was meant to be a climbing trip.

but if this week has taught me anything, it’s that things don’t always go as planned.

that night as i returned to the hotel, i was handed a message. the visa office needed me to contact them as there had been a problem with my application. my heart sunk deep into my stomach, and i instantly knew what i had done.

prior to traveling to mainland china, i had done a lot of research. running your own online-based marketing company from a country that bans the use of facebook and other such websites, requires a bit of pre-planning. i had surveyed all my chinese connections and read every article regarding the “great firewall of china.” i was all set to get around the communist control of the internet.

and then i let my guard down.

i was in this city. this chinese city. this magnificent chinese city where i could still check my gmail and facebook and wordpress. surely all would be well and good.

“sensitive” is what they deemed me. when i asked the travel agent why my visa application was rejected, she pointed to the word “media” and informed me that that was the only reason.

our brains tend to slip into what we know. we forget that words have different meanings and connotations for every individual. what means one thing to me, means another to you. i have never been the best at picking the right words. at consciously choosing the appropriate syllables for the occasion. but this is an instance where i really wish i was.

a month long climbing trip foiled by one word. a puzzle piece of my travel itinerary lost forever under the couch. after deciding that ryan would still head to yangshuo and meet back up with me in america in mid-december like we had originally planned, i was left in my least favorite place…the land of choices, conveniently located near the land of questions.

did i go home? where was home? portland? chicago? should i leave tomorrow? stay in hong kong? visit family? visit friends? see a new place?

it’s been the first time in a long time where i’ve needed to make a decision purely involving me. what did i want to do? where did i want to go?

well, to start with, i wanted to be present in hong kong. i wanted to learn how to say thank you in cantonese and not just mandarin. i wanted to haggle over some jade jewelry.

i wanted to stare down from victoria peak at this beast of a city.

i wanted to experience the ponies.

i wanted to get lost wandering its busy sidewalks. 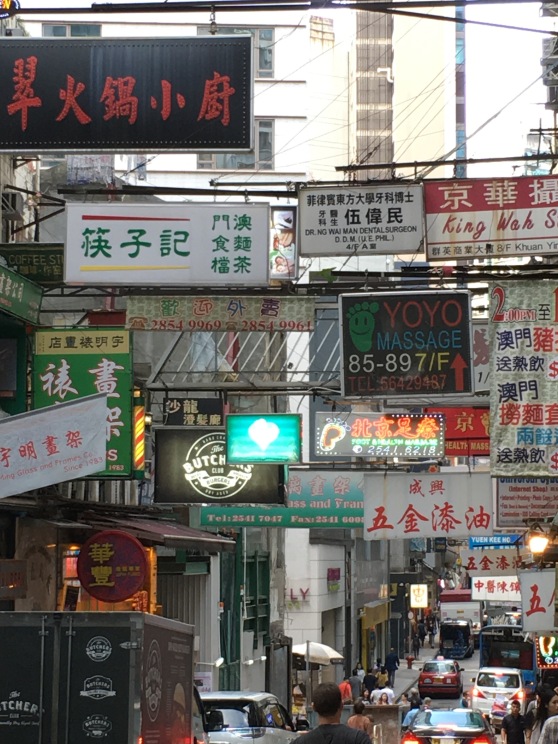 and i wanted to eat all the steamed buns i could find. 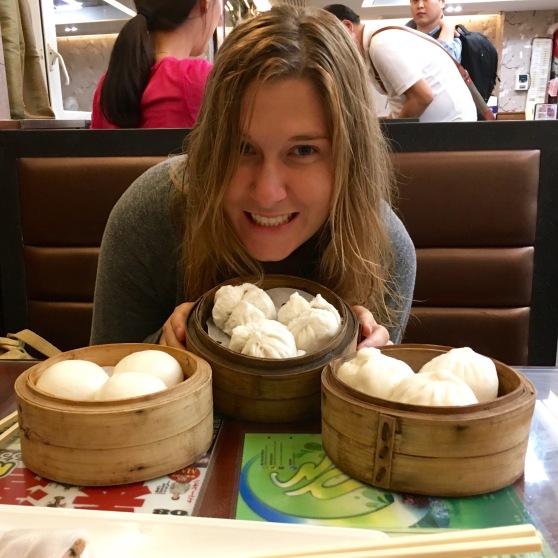