note: these argentina throwback posts are migrated from an old blog. please ignore all the formatting issues that may have occurred. i don’t want to go through and fix them all. 🙂

Argentine Fútbol…
Saturday, April 26.
So I decided to take a risk and attend a soccer game. San Lorenzo versus Boca. We sat in the popular section where seats are the cheapest. It is also where it is the craziest and where things get out of hand. One fight broke out and knocked us all over. There is a mafia connection in soccer. Each team has its own band of people who keep things in order and cheer the loudest and lead the ridiculously vulgar chants. When fights break out, the police break in, but then the mafia guys break in and take the perpetrator back to the stands. Oh how the soccer world works. Now onto the players. What fakers! Argentines are hilariously dramatic when “injured.” Always trying to get that call. It was San Lorenzo 1, Boca 0 in the first minute of the game. After that, nothing but hardcore playing. End score 1-0. ¡Puta barrio Boca! (Fucking Boca neighborhood.)
Some pictures of Argentine’s version of the big house. haha. 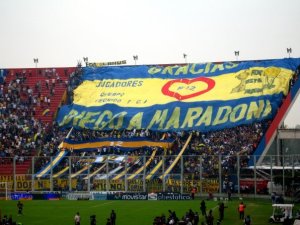 La Doce. Or the twelfth player. Boca’s fans call themselves the twelfth player because Boca’s stadium is very small and the crowd is right on the field. I was at the San Lorenzo stadium. There are people under the banner. They roll it down the stands. Great to watch. 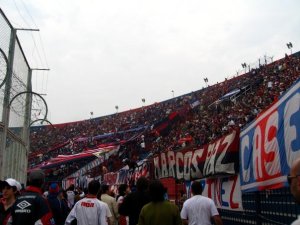 What we entered to… 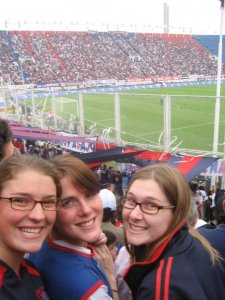 Brittany, Kate, and I in our blue and red! I bought a sweet San Lorenzo track jacket. We could not be caught wearing any other colors in the popular section or we might have gotten thrown out… 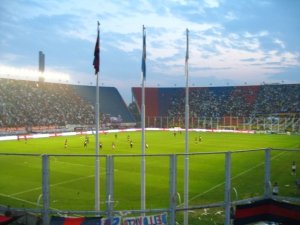 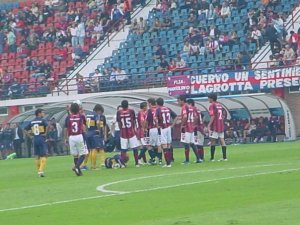 The team. Kate and I googled all the players before we went so that we could scream for them. When we got there, Agustín Orion, the goalkeep, was the only one we remembered. Oh well. Instead, we quickly caught on to chanting swears in Spanish. Something about your bitch mother smoking weed?
A great day. Which ended with a horribly long 2 hour wait to catch the bus back to Buenos Aires.

not sure who enjoyed this spooning session more. 🥰 #bowiethekelpie