the benefit to sydney is its proximity to the beach and the mountains. as we were determined to take in both to the fullest, on day three, we boarded a bus (after unboarding a bus when the driver informed us we needed to purchase tickets prior to riding) and headed to the well-known bondi beach.

but not before strolling to a side street cafe we had walked past the day before, robocog, and filling our bellies to prep for our adventure to the seashore.

after a painless 20 minute bus ride, the skyscrapers fizzled into the background as the standard australian beachfront took over the foreground. surfers in spring suits paddling out for a morning wave. tourists in bikinis forcing themselves to get a tan despite the cool temperatures. and a coastal boardwalk that meandered along the cliffs for kilometers. 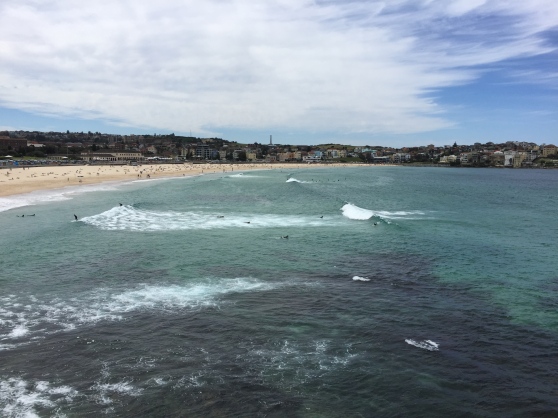 i wandered up the main drag perpendicular to the ocean and found a cafe appropriately suited to become my office for a couple of hours. read internet and outlets.

i’ll spare you the boring details of me catching up on various projects and deadlines and skip to the part where we soaked in this hipster sydney beach town. streets lined with used bookstores. the smells of fresh made something or other wafting through the salty air. various languages spilling out of crowded cafes.

we were going to meet an old friend of ryan’s in coogee, a town up the coast slightly. a quick walk i was told…

step by step along the cliffside path taking in every ounce of the ocean view. stopping in amazement at the sprawling cemetery overlooking the sea. 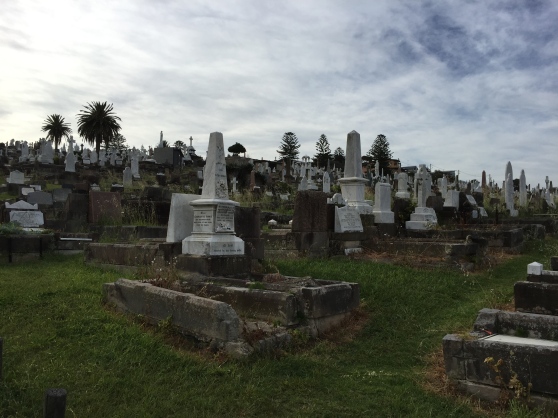 pausing for romantic moments to hug, stare out into the deep blue, and point out distant landmarks.

and ogle over the brilliant sea water pools that are scattered along the coastline. what a brilliant place to do some laps without the fear of sharks chomping your body in half unexpectedly. 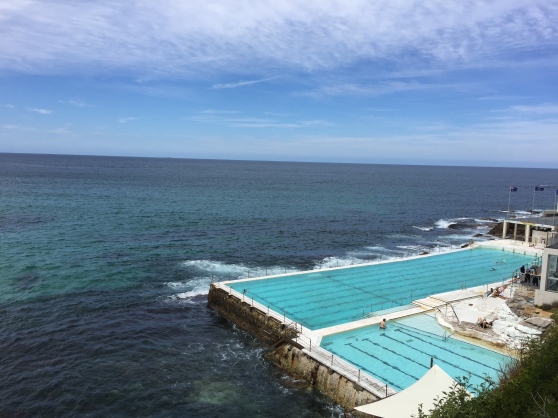 i was totally content…for the first 3 kilometers. everyone that seemed to pass us on the path was jogging, or power walking at least, with comfy-looking tennis shoes laced up to stay fit. as i looked down at my sandaled feet, i wished i could trade with the fitness fanatics. my arches were lodging complaints, and the balls of my feet were unsure if they were being punished for some past indiscretion.

we hit a cove that offered a shortcut to the path by cutting across the beach. i slipped off my sandals and indulged in the soft sand massaging my tired feet. the shoes never went back on.

barefoot we went. up and down and around the ins and outs of the cliffs. it was getting windy, and the sun was nearing her daily farewell. if there were any taxis hanging around, they would definitely have gotten our fare. but alas, there were none. so we just kept walking. almost right through a film set. fortunately, they had a young man (probably about 12 years old and dressed in board shorts and a blazer) acting as security.

his hand went up into the universal sign for stop, and he formally explained that filming was in progress and asked if we could walk around as he gestured like a flight attendant to the alternative route.

yes i wanted to hug him for being so dang adorable, but that would totally ruin the persona he had so amazingly perfected. so i let him be and followed his instructions with a smile.

and then we were there. a “quick” 5k walk to coogee. a great place for drinks by the shoreline and dinner in a cute neighborhood tucked away from the scene.

the night ended as any night should… catching up with good friends and eating pretty good mexican food (hard to come by in australia).

tomorrow we head to the mountains. (and by tomorrow i of course mean last week because this blog is way overdue, but just roll with in ok?)

One thought on “day three: a quick 5k walk”