after standing for 30 minutes in the sydney post-customs airport lobby trying to figure out why there were numerous cameras and crew members running around, i gave up and attempted to navigate my way to meet ryan. i know i could have simply asked one of the people running around with yellow badges, but i was hoping the queen or someone equally as important would just walk down the ramp and the commotion would all make sense.

when awkwardly trying to lock eyes with someone involved failed, i just hauled my overly heavy hodgepodge luggage onto the bus to the virgin australia domestic terminal and eavesdropped on two aussie teachers explaining to an older gentlemen about their field trip to america. i wish my school had taken me on a field trip to australia when i was in grade school.

oh well. i was here now. in sydney finally. after six months of traveling around this epic country, i finally was going to explore the one place everyone assumes i’ve already seen.

take a taxi to our airbnb rented third floor one bedroom apartment on the corner of taylor square in darlinghurst, or surry hills. we never quite figured out exactly which neighborhood we were temporary residents of, but with a view of this building from our window, i knew i was going to like this part of town: 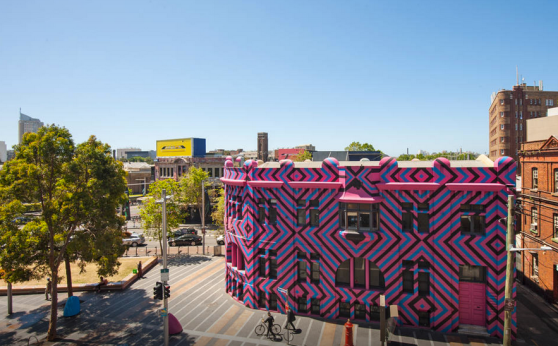 “they” always tell you to get good walking shoes. that advice has never really computed with me, but i don’t think my pons handmade spanish leather slip ons appreciated the kilometers forced upon them. from the random coffee shop on the corner, we acquired a recommended breakfast nook, and with cappuccinos in hand, we strolled through sydney’s city streets under a gray wednesday morning sky. lined with small two story victorian flats stacked side by side. intricate iron lace fences framing petite patios often left empty to ryan’s dismay.

caught in our love bubble (after being apart for two months), we wandered into orto trading co. and took a seat in the back. walls lined with windows, dangling vases with fresh flowers, a cheerful, flirty waitress, and a side of pork belly to introduce us to sydney’s emerging cafe culture.

and it began. our week as sydney dwellers. we meandered up and down hills, through parks, alongside giant buildings until we reached the harbor. that picturesque body of water so synonymous with this new south wales city.

look to the right and there it is, the sydney opera house. surrounded by tourists snapping selfies.

look to the left and there it is, the harbor bridge. miniature human ants marching along its arches.

look across the water and there it is, luna park. years of entertainment smiling at you from the past.

so now what? what is left to do in this sydney after standing at the edge and taking it all in? we headed to the left. under the bridge and along the water. 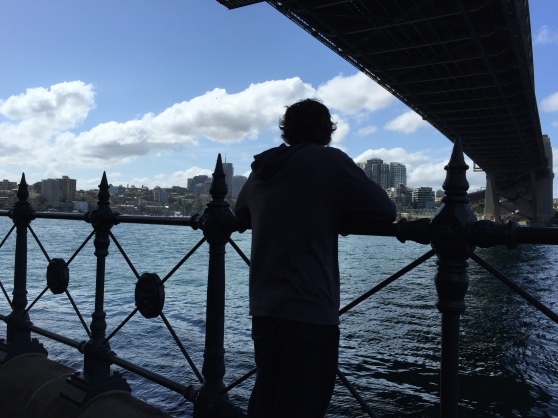 through “the rocks” district with cobblestone beneath my now aching feet. up some stone steps to find the observatory and back down when the supposed high tea was a myth.

then onto to glebe. as life would have it, my american friend daisy happened to have just arrived in sydney a few days prior. we met up with her and her friend for some snacks and drinks at a local pub, friend in hand pub.

what a place! complete with hermit crab races and a complimentary shuttle to get you home safe and sound. not to mention some “regulars” over the age of 65 who truly embodied aussie fun. nothing like ending day one with three drunk old men telling ryan to take care of me.

late night pad thai on oxford street and into bed. good night sydney. it’s 6am in los angeles, and my body clock is fully confused…