sometimes i think about all the things i would do if i went and adventured in a foreign country for a year unemployed. but, after hearing all the stories ryan had to tell from his year abroad in north america, i don’t think i will ever be able to match such an epic collection of tales. i might be able to make some money writing his biography one day though. i think it will be titled, if this plaid shirt could talk: the tale of one unbridled bloke. 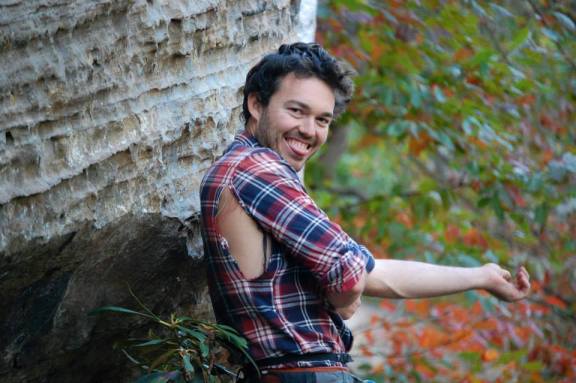 i have never known someone to get into so many sketchy situations and come out alive, but i’ve learned it’s apparently a grant family trait to always land on your feet. and this little filly is glad that he does.

in honor of ryan’s recent departure from the states back to australia, i am posting a special guest blog. written by the one and only ryan grant.

If I had a blog it would go a little something like this:

I’ve seen bears, heard cougars, hit deer, chased off coyotes, been bitten by spiders, stung by bees, had stare downs with venomous snakes while belaying, and stood in dog poo.

I’ve marked my territory across a good portion of North America. I’ve peed off cliffs, on cliffs, on cars, out of cars, out of tents, but never in the tent. I’ve even peed in toilets from time to time, like actual flushing ones. I’ve peed on glaciers, into crevasses, into the wind (lesson learned), with the wind, into bottles, plastic bags, the desert, the snow, rice cracker boxes, and laughed so hard on several occasions I think I’ve even peed my pants.

I’ve had run-ins with the law, seen the changing colors of Autumn leaves, and spent more money than should be considered reasonable for someone unemployed this long, but I’ve meet the best people in the most amazing locations while having the funnest adventures. I’ve had my attention drawn by a local filly, and now a piece of America may be coming back with me. I’ve scared myself so often that my adrenal gland has now grown larger than both my balls. Oh, and I’ve showered at least a dozen times in the last seven months.

One thought on “guest blog: if this plaid shirt could talk”