holy tourists. jaipur is definitely more fueled by tourism than delhi. there are 4.5 million people in jaipur and most of them work in tourism. well, i guess we will go and support their economy.

old jaipur is over 200 years old. new jaipur is only 60 years old. there seems to be the old version and the new version in every city in india. i suppose that is the case in most cities, but perhaps it is not so simply labeled, old and new.

we first headed to the amber fort and palace. we were planning on taking an elephant ride to the top, but the line was atrocious. why waste a couple of our precious hours in line waiting to sit on top of an elephant? so i just took pictures instead. apparently, there are normally 100 elephants, but today there was a parade somewhere else and 40 of the elephants were working that instead. working, yes working. all the elephants are actual employees of the tourism board. 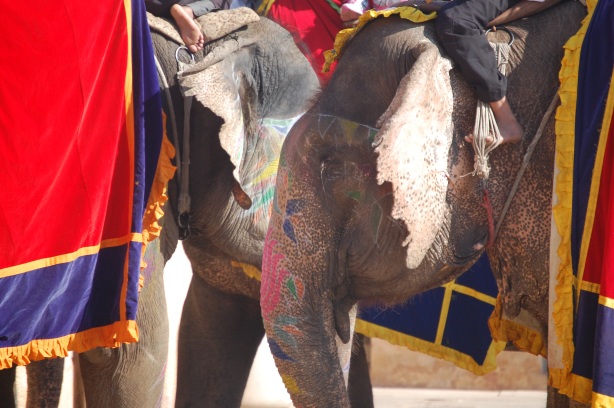 the fort is surrounded by the great wall of jaipur, 18 km long. and inside the palace is gorgeous. it is fun to close my eyes and imagine the space in the height of its beauty. mirrored work on the walls. jeweled ceilings. bright colors and sun streaming through the windows. women dressed in luxurious sarees and veils. white horses prancing with high knees. ahh to be part of the maharaja.

you could have twelve wives. the king had twelve queens. when they started getting jealous and fighting, he built them each their own apartment. each apartment was connected by a secret passage way so that the king could come and go as he pleased without the other women knowing. oh and if he got bored with his wives, he could always visit his 19 harems.

oh and he could play with the monkeys too. that is what i would do.

onto jantar mantar, the observatory full of huge stone instruments telling time and horoscopes by the sun and shadows. it is home to the largest sundial in the world, which shows time down to two second intervals. crazy to think about telling time before watches. crazy to see ancient technology still working.

our driving to and fro became a bit crowded as thousands of muslims were let out of a very special mosque. some sort of holiday or festival. they all walked the main street back to their homes. cars at a standstill. it made for great people watching and photography.

a quick stop for fresh crushed sugar cane juice (our new group favorite). and a photo shoot with some local young indian boys. don’t worry, none of them were stolen. 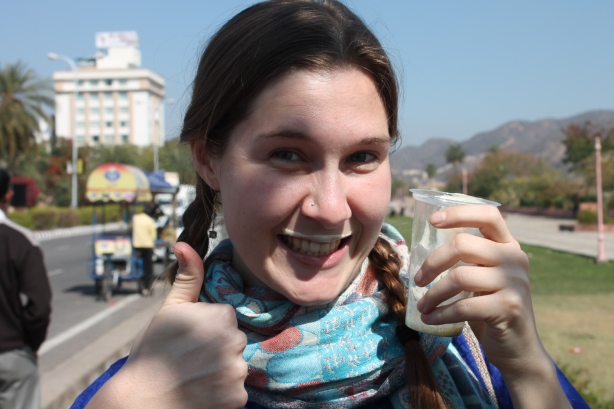 we finally made it to the city palace and eventually picked up a few more items at some local shops. i got to switch over and converse in spanish with one salesman. way easier to bargain when you know the language. i decided i needed to start trying to learn a little bit more hindi. so…

…i downloaded an app. first hindi word of the day: jānanā or knowledge. fun to say.

knowledge. i am gaining so much knowledge. exploring so much knowledge. our conversations in the car, over breakfast, have evolved and deepened. we get into heavy topics about religion and education. about the possible fall of some old structures to make way for new ideas. or old ideas from old cultures applied in new ways.

we are all on this earth together. there is a lot to learn from those who are outside our immediate circumference. i am glad to be exploring just a bit more of this big world.

not sure who enjoyed this spooning session more. 🥰 #bowiethekelpie