sorry for the delay. onward with india…

waking up early is easy with the promise of chai. walk down the dead streets and find the nearest chaiwala. in fort cochin, pay two rupees and get a sugary shot of chai. served in a small glass vessel (literally think shot glass) and steaming hot. your mouth and tongue adapt. it is nearing the end of this trip, and i am starting to be able to slam the heat without burning my mouth. teresa said it’s about breathing over the liquid in your mouth or something like that. she is amazing at this feat of magic. i bet teresa could swallow fire and not even blink.

all chai-ed up, we head to the dirty beach in fort cochin. 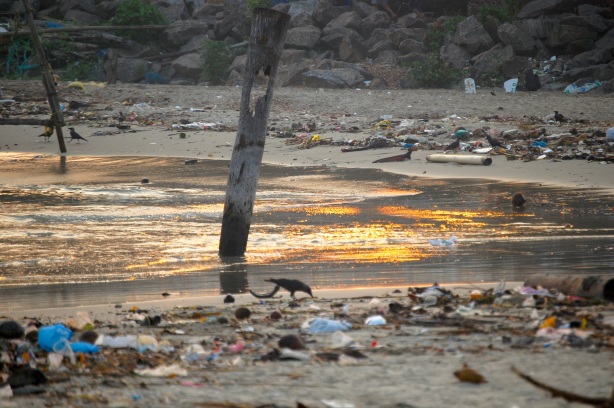 it is lined with chinese fishing nets and boats. they throw out the nets and reel them in.

what are they catching? i have no clue. i did not make the tourist stop and pay them for a tour and explanation. teresa and sybille did though, so maybe this information made its way into one of the russayog blogs. but i can tell you about the shoes.

there is so much trash on part of the beach, and the majority of it is shoes! if i wanted to dig through it all, i bet i could find a hundred matches, easily. where did all these shoes come from? do people really lose their shoes to the arabian sea that often? or lose their shoes in general that often? high heels, tennis shoes, sandals. they all found a second home upon the fort cochin beach.

we yoga it up. and then teresa and i retreat into the fact that we are actually children inside. we do some ballet moves and draw in the sand with our feet. “chardi kala” we write. unbounded optimism. i draw a smiley face. we run into the waves and rush out. they wash away our words and leave a black film outlining each letter. smiles.

walk through the empty streets (kerala still on strike) and daydream. it is around 7am and the field is already packed with boys playing soccer and cricket. i guess i would be doing the same thing if i had the day off school due to a strike. and perhaps, they wake up early to beat the heat, but i think they literally hang out there all day. sweating running base to base. are there bases in cricket? it seems like there is.

and then i see her!

a fellow yogi friend of mine from portland has been traveling around india parallel to me. for most of the trip, i would see her location on facebook and it would be following me from city to city but a few days behind. (you can read her amazing blog/project here.) she and her boyfriend are making a documentary over the course of their six weeks in india. i had seen that she was going to be in kochi, and hey, so was i! finally our paths cross. she sent me a message with the name of her hotel.

walking back from the beach, i see her hotel from a distance, but it is breakfast time, i will try to find her later.

i see her standing by the field. cue dramatic music for our should-be-in-a-movie reunion scene. i start running towards her screaming, UMA! she sees me. we hug the biggest hug ever and never let go.

and then we let go.

and then we share our two totally different experiences thus far in india.

and then we say good bye, for now.

and then i eat breakfast at the hotel.

today is for exploring. alone. i walk aimlessly around fort cochin. taking photographs of baby goats and girls practicing dance on doorsteps. 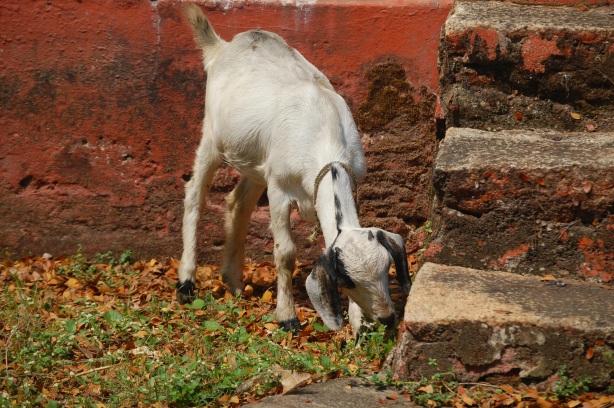 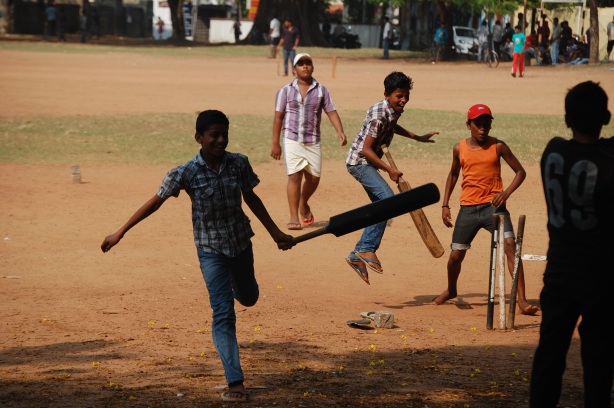 i find a post office and get excited, but of course it is closed. the whole town is shut down. so, i shut down too. i find a tree by the beach and lay down underneath its shade.

it is hot here. hot and humid. like a midwest summer. just how i like it. i pass the day away by the seaside. watching people. watching waves. watching the black film outline each letter i write.

in the evening, sybille and i put on our tourist hats and head to a traditional kathakali dance performance. it starts with an open viewing of the men putting on their makeup. an hour of transforming the normal into the fantastical. becoming the story. kathakali is a form of dance that includes super detailed movements of the eyes, hands, feet, and whole body to act out a play. the combination of movements creates an actual language. sign language becomes full body language. there a series of movements that means father, mother, baby, happy, a bee pollenating a flower (yes this is actually one they demonstrated), etc. any word has a set of motions. 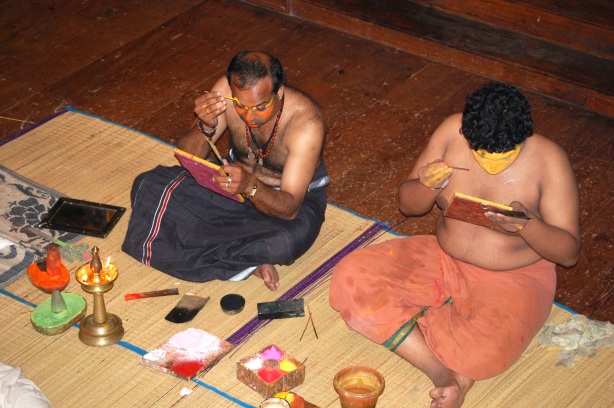 the play we went to see was about an evil god pretending to be a beautiful lady trying to have sex with this warrior dude in order to get into heaven. he figures out who she really is and kills her.

now. i can tell you what the story was about because the handed out the script prior to the start of the performance.

i now know how most people must feel when watching one of my modern dance performances. wow was i lost. had i not had that script, i would have been so confused. clearly, i did not understand the body language. but nonetheless, it was quite a performance. big costumes, big drumbeats.

my bedtime is getting earlier and earlier. maybe the heat. maybe the exhaustion of traveling. but as soon as that performance let out (maybe 7:30pm), i headed back to the hotel and crashed. dreamland status.

wishing i was riding the waves, but hanging with this cutie is pretty good too. 🐕 #bowiethekelpie #beachdog #mauilife